In for the Long Haul Training

In for the Long Haul is Chaplain Calvert’s behavioral health training for first responders.

The Need is Staggering

First responders are exposed to a lifetime of trauma and occupational stress, often manifesting itself in depression, PTSD, burn out/drop out, suicide/attempted suicide, family conflicts, substance abuse, and more–at much higher rates than the general population. The statistics are alarming!

And yet they don’t tell a complete story. 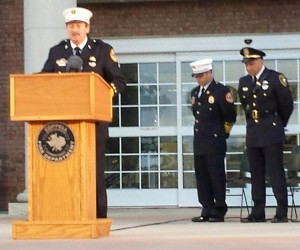 The Cost is High

For one, the statistics are incomplete. Due to the stigma for families, suicides are considered to be under-reported.

Second, these problems not only affect the lives of co-workers, friends, and family members with various degrees of human suffering, but also cost employers (local counties, cities, fire/police/sheriff departments as well as state and federal agencies) billions of dollars in direct and indirect expenditure.

The CDC estimates that each workplace suicide costs the agency/business over $1 million, while the costs related to depression/PTSD are even higher; and the cost for alcohol and drug abuse is more than the previous two combined.

We’re Committed to a Solution

in individual and group training sessions and at conferences, and is currently taking applications to provide a limited number of free trainings for departments that can’t afford it.

For more information about bringing
In for the Long Haul
to your department or applying for one of our grants, contact Steve.

“As a 20-year clinical psychologist, and former military officer, I strongly support In For the Long Haul for your personnel—this is critical training those in the fire service and beyond need right now!”