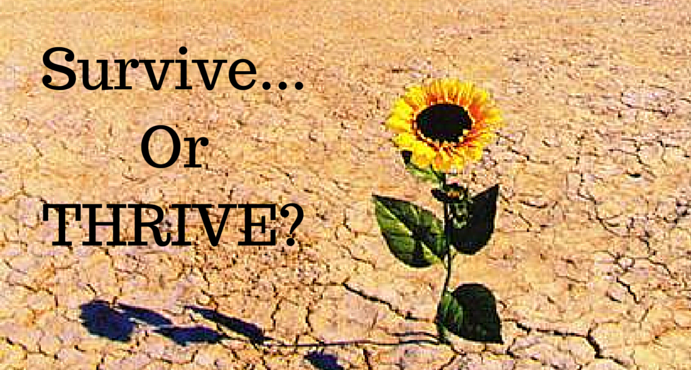 We used to have this plant that I only watered when I saw it draped lethargically across the rim of its pot like someone who had just crossed the desert on his knees. With a little H2O, it would perk back up and look great…for awhile.

Then it would once again appear to be dying of thirst, I’d water it, it would spring back…and so on. Such was our relationship for a couple of years.

One day it occurred to me that it might benefit from more proactive care, so I watered it when the dirt was dry, before the plant looked on the verge of death.

To my utter surprise, it began to bloom a few days later! I didn’t even know that was part of its DNA.

Clearly, taking better care of it allowed it to thrive, not just survive. It had been surviving, but had very literally lacked the resources needed to go the extra mile and bloom. It wasn’t being a bad plant. It didn’t need to just “get with the program” or “get over it.” It simply needed what it was created to need.

I saw this as a metaphor for self-care. Like many of us, I was often guilty of reactive, not proactive measures of managing my health.

I would get better–out of crisis mode–but I never got really great.

To think about what it takes to thrive, it can be helpful to work back from surviving. For example, where would you go for help if you found yourself in a situation that you were unable to overcome, like a chronic physical condition, grief from a loss, crippling fear or panic after a traumatic event, persistent depression, an addiction you could not longer deny, or a persistent death-wish?

Most of us know that if things got that bad, we would need to visit with our doctor, minister, chaplain, a counselor or a friend before we reached that point of no return where asking for help doesn’t present itself as an option. In these extreme situations, reaching out is critical for SURVIVING.

Get Ahead of It

What if you just wanted to avoid the collateral damage and risks associated with survival mode?

We recommend keeping an eye out for the markers that might indicate your needle is starting to point away from thriving, including:

Why not consider reaching out for support BEFORE you desperately need it? Like our plant, it’s not a sign of weakness or inadequacy. It’s just supplying yourself with what you were created to need.

You just might discover some relationships or areas of your life that–like our plant–could bloom in ways you never could have imagined.